There's Just a Little Bit of Dust in My Eye.

"There's just a little bit of dust in my eye
That's from the path that you made when you said your goodbye
I'm not weeping because you won't be here to hold my hand
For your information there's an inflammation in my tear gland."
-Flight of the Conchords, "I'm Not Crying"

I am a sap. I almost always cry at weddings--slightly less often at sad movies. I also cry when there's a poignant commercial (even though I am sometimes shaking my fist and screaming, "Damn you, advertising industry!" at the same time for manipulating me just the way they planned to). I get a lump in my throat if I am listening to the right song at the right time.

You could say I am easily moved. But not every tear-jerker works on me--I could definitely do without The English Patient and Titanic. (Leonardo DiCaprio was so much better in later movies!) Here are some things that have me reaching for the kleenex every time.

O Captain My Captain in Dead Poets Society.
For this part of Dead Poets Society, it makes no difference whether I have been sitting there watching the whole movie or I just change the channel and catch that scene--the tears just start to flow. I'm like Pavlov's dog, but with desks and inspired schoolchildren.

The new dog in The Royal Tenenbaums.
This is one of my all-time favorite movies, in part because so many actors do so many emotions so well. But when deadbeat dad Royal gives estranged son Chas a new dog (minutes after the old one is killed), and Chas says , "I've had a rough year, Dad," it gets me every time. This was the scene that proved Ben Stiller is a good actor--not just a funny one.


That damn Sarah McLachlan SPCA commercial.
I know I am not alone here--this is notoriously heart-wrenching, and it seemed like they ran the ad for 10 years. At first, when it came on, I would break down and hug my rescue dog (tighter than she'd like). But after seeing it dozens of times, I could no longer watch it. It devolved into me screaming, "F%^* you, Sarah McLachlan!" and changing the channel or leaving the room.

Nike's 2008 Olympics ad with the Killers' "All These Things That I've Done."
It is a fast-moving montage of athletes in moments of glory and failure, along with other random images, as the lyrics "I've got soul, but I'm not a soldier" build momentum. The song is amazing, and it combined with the images of the athletes at various points of success and failure goes right to the gut. Say what you will about Nike, but their ads are genius. (It's unfortunate that Oscar Pistorius was featured prominently in this ad, but this was before we knew what was going on with him, so I allow myself to love this anyway. Lance Armstrong is also in this one, but I can ignore his problems.)

That brings me to my next one:
Pretty much any Olympic medals ceremony (although I am more likely to cry if an American has won gold).
I have always loved the Olympics and marveled at how impressive it is when someone is that good at something and is willing to work that hard at it. I was a rower in college, and I will never forget the feeling of having a gold medal draped around my neck, standing next to my teammates, with a crowd smiling and clapping. I can only imagine how those emotions would be magnified on an Olympic podium. I would not be just a little weepy--it would be full-on Rulon Gardner-style waterworks.


Nike's ad with Lance Armstrong riding by a children's hospital.
It shows Lance riding on the open road, past a train, a group of motorcycles, and a children's hospital, where he pauses to raise a fist for the kids who flock to the window to see him. The song they picked is perfect, and I found it so inspiring I looked up what it was (someone I've never heard of), downloaded it, and put it on my running mix. It remains one of my favorite songs to run to: It makes me run faster and breathe deeper.

The TV show Parenthood.
I think the reason I like this show so much is because I identify with many of the characters' different roles: mother, daughter, wife, sister. I cry on average once per episode, but sometimes not at all and sometimes twice. This blog post on Slate does a good job of describing it. I did not grow up in Berkeley with a big, pushy, dramatic family, but something about how the characters relate to each other strikes a chord. Family relationships and marriages are complicated, and this show shines a light on those complications.

Posted by Allison Burtka at 9:30 PM No comments:

Beauty Within the Beltway: Cherry Blossoms


D.C. area residents, like most Americans, work long and hard hours. We stress ourselves to sustain our standard of living, but it is too easy to forget to live our lives. Take a morning or afternoon off for the sole purpose of allowing yourself to find the beauty within the Beltway.

That’s how long I’ve lived in the Washington, D.C. area. I have been to the National Mall many times and have walked around the Tidal Basin to the Jefferson Memorial a few times, but I had never been to the Tidal Basin during Cherry Blossom season until this year.

I generally try to avoid events in D.C. that attract large crowds. I like being able to walk in a straight line without people randomly stopping in front of me or stepping into my path without any care that they are getting in someone else’s way. However, I wanted to see the cherry blossoms and knew that I would have to deal with the crowds one day.

The following Thursday morning I drove across the 14th Street Bridge into D.C. and found a parking spot in East Potomac Park, which is just south of the Jefferson Memorial and Tidal Basin. I had two goals: 1) to see the cherry blossoms; and 2) to have a relaxing run in the temperate weather. Equipped with only my phone, I set off.

I ran towards the Tidal Basin and saw the sidewalks around the cherry trees were packed with tourists. I wanted to have a decent run without having to slow down and stop for the crowds, so I kept my distance from the Tidal Basin and ran around the other side of the Jefferson Memorial. I ran along the surrounding streets and crossed the Kutz Bridge where I marveled at the view of the blossoms encircling the entire Tidal Basin.

After crossing the bridge, I veered to the right where there is a visitors center near the World War II memorial. A school band’s drumline was practicing, and my visceral response was to increase my pace to match the beat of their drums. After passing the vistors center, I found myself on the south side of the Reflecting Pool. I turned left and ran about halfway to the Lincoln Memorial  before turning around to begin the leisurely part of my run.


When I reached the visitors center, band members were twirling flags while the brass section played a few patriotic songs. I stopped and took a few pictures with my phone before continuing my run.

This time I veered to the right along Independence Avenue, so that I could see the Martin Luther King Jr. Memorial. I had seen the memorial before, but I had not noticed how the civil rights hero’s words juxtaposed with the view of a memorial to a champion of freedom who also was a slaveholder.

I then ran back along the Tidal Basin towards the Kutz Bridge. I stopped many times to take pictures or to avoid running into sightseers who were as lost in the beauty of the blossoms as I was. I soaked in the sun reflecting off the rippling water of the Tidal Basin. The wind rustled the branches and brought a peaceful feel to the surroundings despite the crowds.


Unlike the humid days of July and August, the air was cool and dry and each breath reinvigorated my lungs. When I made it back to my car, I felt relaxed and satisfied with my first visit to the Tidal Basin cherry blossoms. I still know that the Saturday or Sunday crowds during cherry blossom season might be too much for me, but I will have to find time to visit on a weekday again.

Posted by Jeff Burtka at 3:57 PM No comments:

While I eagerly anticipate the new season of Mad Men, here are ten important life lessons I've gleaned from previous seasons. Take heed. Because why not take advice from emotionally stunted home-wreckers who drink all day?

1. Remember what you are being paid for.


Don: It’s your job. I give you money. You give me ideas.
Peggy: But you never thank me.
Don: That’s what the money is for!

2. Always have a backup plan.

3. Set priorities and live by them.

“As far as I’m concerned, as long as men look at me that way, I’m earning my keep."
-Betty

4. Don't pretend you know what men do if you really don't get it.


“But that’s life. One minute you’re on top of the world, the next minute some secretary’s running you over with a lawn mower.”
-Joan

“It wasn't a lie; it was ineptitude with insufficient cover.”
-Don

7. Blaze your own trails.

“If you don’t like what’s being said, change the conversation.”
-Don


"You want to be taken seriously? Stop dressing like a little girl."
-Joan

"My father beat the hell out of me. All it did was make me fantasize about the day I could murder him."
-Don

10. Take the time to get to know your employees.

"Well, I've got to go learn a load of people's names before I fire them."
-Roger 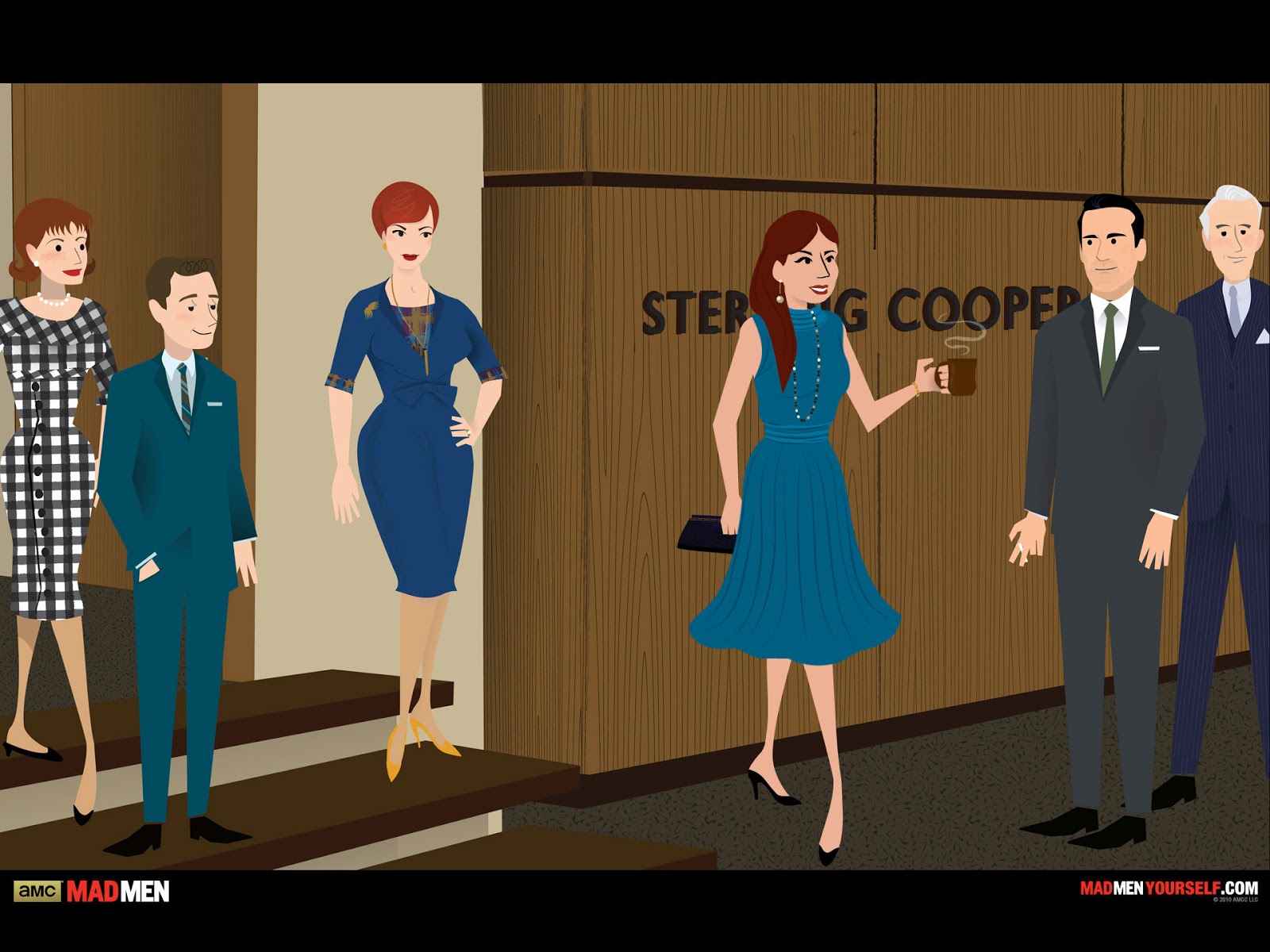 Here's me, Mad Men-ified, thriving at Sterling Cooper after taking all these lessons to heart.

Posted by Allison Burtka at 9:47 PM No comments: