No, Where Are You FROM?

A couple of days ago, someone I'd just met asked me, "Where are you from?"

It is about the millionth time I've been asked that question. Sometimes it is an innocent enough question, but my answer is complicated. I live in a northern Virginia suburb of D.C., and I have lived here longer than I have lived anywhere, so I consider myself from here. My dad was in the Navy while I was growing up, so my family moved every few years, and I am sort of from all of those places. I was born in San Diego. When I sense that the person asking the question is asking where I spent my childhood, I say California, because most of it was there. I am a little bit from Michigan, because I spent most of high school and college there, and those are the years I'd say I did the most growing up.

Sometimes, no matter which of these answers I give, the person responds with, "No, where are you from?"--with a dramatic emphasis on the "from." This emphasis is supposed to convey that they are asking about my ethnicity. Really, they are asking where my ancestors are from. (I just told them I was born in California, so they know I didn't actually come from another country.)

I have been getting this question, with the same heavy emphasis, since I was a teenager, if not before that. And it annoyed me then as much as it does now. If you are asking what my ethnic background is, ask what my ethnic background is. If you are asking where my parents are from, ask me that. But don't ask me where I'm from, as if it's some kind of code that allows you to ask about my personal ethnic identity without having to say the words. I won't answer until you come out and say what you actually want to know.

I am half Filipino and half white (various European countries), and it's not obvious to everyone that I'm half Asian (and usually, only Filipino people guess that I'm part Filipino). And I don't mind people's curiosity about that--I am equally curious about everyone else's background. But why not just use the words "race" or "ethnicity" or whatever it is that you mean? Because you're uncomfortable saying those words?

The worst is when the person asking the question is also a minority who probably gets the same question often enough. Jeff likes to remind me of the time an Asian girl asked me where I was from, and I responded, "You mean where did I grow up?" "No." "Where was I born?" "No." This went on and on until I asked her if she wanted to know what my ethnic background was.

The uglier version of this question is "What are you?" I've had my share of that one, and it has always made my blood boil. I certainly won't answer that one the way the person expects, because it is decidedly not an innocent question. I wrote about my anger over this question back in college--when a group of snickering guys clearly had been guessing about my background among themselves, and one turned to me and blurted out, "What are you?" This question also came from people whose racism was so strong their disgust was dripping off of them. What am I? Well, first, I'm a who, not a what--not an "other."

Another thing I've been called many times, sometimes by people who think they are complimenting me, is "exotic." Like I just busted out of the jungle? Like an exotic dancer? Like someone so strange and different that you can't even fathom me as part of your reality?

For similar reasons, I loathe the use of the word "Oriental," unless you are talking about rugs. It's "Asian," people. (This NPR story from back in 2009 explains why it's offensive.) I still have to correct some of my older Asian relatives who say it, because "Oriental" used to be acceptable, but it really has got to go. I'm sure we all have labels we hate because of their connotations--ones that have evolved over time.

Probably because my answers to these questions and others like them have never been simple, I am fascinated by everybody else's answers. (I love that show Who Do You Think You Are?) So I hope I don't offend you if I ask about your ethnicity without dancing around it. I hope you understand where I'm coming from.
Posted by Allison Burtka at 9:02 PM No comments:

In the Name of Better Writing

We all know active voice is better than passive voice. But sometimes translating from one to the other isn't easy. Streamlining your writing to make it more active and less wordy helps you get to the point faster. Here are a few quick things to look for. 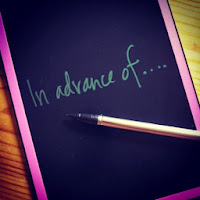 1. Take it easy on the prepositional phrases.


A sentence full of them is difficult to read and might make your reader tune out. If a sentence is one long string of prepositional phrases, look for ways to get rid of some.

The report is considered by many researchers to be of great importance for workers in that field.


Example 2
The effect of the announcement by the company on its stock price should not be underestimated by investors.
(4 prepositional phrases, vague)

Better:
Investors should not underestimate how the company's announcement will affect its stock price.
(no prepositional phrases)


Do you need to say "in addition" or "as a result"? Maybe the context calls for it, but probably not.

It might be obvious that sentence 2 is a result of sentence 1.

Another phrase to watch for:
"In my opinion..."
If you're writing it, it's probably obvious that it's your opinion.

Posted by Allison Burtka at 10:37 AM No comments: