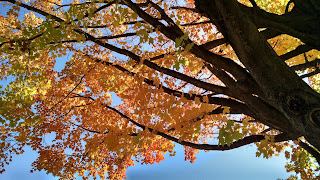 Summer, I hope you don't mind my infatuation with fall. I'll always come back to you.
Posted by Allison Burtka at 11:18 AM No comments: 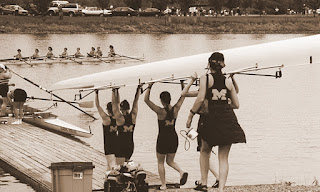 This summer, since moving back to Michigan, I’ve been able to reconnect with several people I hadn’t seen since high school or college. Last weekend, I got to spend a day with a bunch of college rowing teammates, some of whom I see regularly and others whom I hadn’t seen since we graduated. It is always good to see old friends, but when they left, I felt uplifted in a way that is hard to articulate.

Only part of it is nostalgia and reliving the memories. Another part of it is that they are amazing people doing amazing things. One of them is training to swim across the Straits of Mackinac, next to a perfectly good bridge that normal people might run across. Another left her job to travel around the world with her husband for months, exploring new places and making up the itinerary as they go along.

I think the biggest part of it is that all these people knew me well when I was growing up and growing into my adult self. My teammates and I shared the incredible experience of rowing and practicing together every day, pushing our own physical and mental limits, watching each other try and fail and succeed, and giving each other a gentle nudge (or a swift kick in the ass) when we thought it was appropriate. We often practiced early in the morning, which meant we were out rowing in the dark, slicing through the water as the sun rose above us.

It was not always perfect. I was closer to some teammates than others, and of course we fought and annoyed each other sometimes, much like family. But we always supported each other. And I think that’s why our little reunion was so comforting. It’s that the people who knew and believed in me years ago still do, and I still know and believe in them, even though it’s no longer about rowing.

In some life experiences, your character is laid bare, whether you like it or not. This is what I shared with my teammates. The people who see you through these experiences, especially if they experience these things with you, know you in ways other people don’t—like coworkers you see every day but have never seen you cry or laugh until you’re shaking. My teammates and other people who saw me through meaningful moments in my life, even the ones who annoyed me, had a large part in making me who I am.

My husband was on the men’s rowing team, and we all knew each other from competing around the country together. Recently, he caught up with one of his teammates, whom I hadn’t even talked to since college. When my husband told him what I did for a living, he said it was exactly what he envisioned me doing post-college. That was also strangely comforting—that someone who knew me back then thinks that what I’m doing now fits me.

This is not to say that I have a strong bond with everyone from my formative high school and college years. With some people I used to be friends with, we now have little left in common, and there isn’t much to say that’s not about the weather or how old our kids are. But with others, I’ve discovered that we have even more in common now than we used to, and there is some wavelength we connect on that wasn’t there before.


I am thankful for these connections—both the ones that have been sparked anew and the ones that were always strong, even if they went silent and unused for years.
Posted by Allison Burtka at 9:00 AM 1 comment: